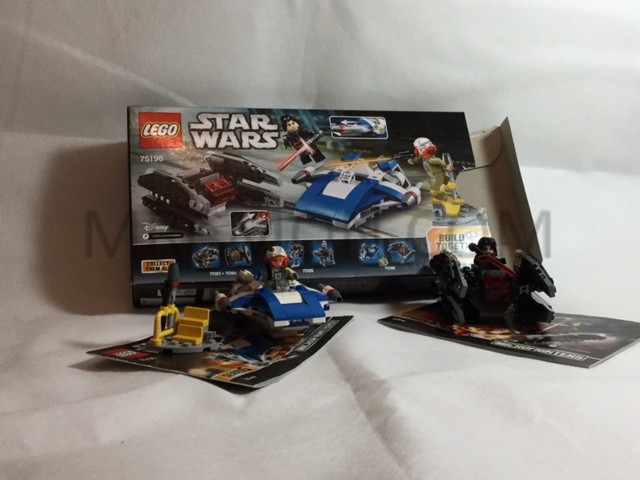 On Wednesday 14th February 2018, my uncle brought the following Lego set that is spectacular: I also built it on the same day. This Series 5 microfighters set is amazing as it includes 2 Lego Minifigures and a small repair center for the A-Wing; the 2 Minifigures are Kylo Ren and a female A-Wing pilot. The mini Resistance repair center includes an extra missile and a spanner.
Moving onto the ships, they are really cool and not hard to build, personally, I think that it should take 5 minutes to build since there aren’t many pieces and the instructions aren’t really too complicated to understand.
The Lego Minifigures are really cool, especially Kylo Ren. I think he is the coolest because unlike the other Kylo Ren figures, it doesn’t have a cape, a mask because of the rage that filled inside of him, this happens in the VIIIth film. Also, he has a different torso, I think  Lego have done this because, in the 8th film, he took off all his top layers when he was going to fight his uncle Luke Skywalker. If this were in the film, an A-Wing pilot with a gun versus Kylo Ren with a red lightsaber, Kylo Ren would probably win.
I think what Lego should do next is add a small battle station or repair station for the First Order because in this set and set 75195 ( Ski Speeder VS First Order Walker), the Resistance gets an extra battle station, so it would be fair if the First Order get one. I would rate this set 5 out of 5 because I love Star Wars and Lego.  You can buy this on Amazon here.

I write about new toys, books and video games.  I will give my honest opinions and advice.